I spent a couple of weeks exploring St Louis and ate way too much BBQ and sampled more donuts than I should have but I came away loving this city. In addition to the things I already knew about St Louis, like Gateway Arch National Park and the Mississippi River, I was pleasantly surprised to find there are so many other fun unique things to do. From restaurants that have been around for ages, to re-purposed buildings and street art, here are a few unique things to do in St Louis.

Union Station Hotel: in 1894, St Louis literally became the Gateway to the West when Union Station opened. At that time, it was the world’s largest and the busiest train station. Just the roofed trainshed covered forty two train tracks. At one point 100,000 passengers a day passed through the station.

In the 50’s and 60’s, with airplane travel becoming more easily available, train travel decreased. The station became too expensive to maintain so, in 1985, after an extensive renovation, it reopened as a hotel.

Now a member of the Historic Hotels of America and a National Historic Landmark, the Union Staion Hotel has over 500 rooms, a Grand Hall, which includes a bar and restaurant and a huge event space.

While the entire hotel is amazing, the star is the Grand Hall. Even if you aren’t staying at the hotel, it’s definitely worth stopping by to see it. It’s has huge and I mean huge, arched ceiling with frescoes, mosaics, gold leaf details and stained, hand cut, Tiffany glass. It’s unlike anything I’ve seen in the states.

While sipping one of their classic cocktails, at one of the longest bars I’ve ever seen, you can sit back and watch the 3D light show they have nightly. If you are hungry, they have a really great burger too.

SouthernerSays: Since I visited St Louis, the city has opened a brand new aquarium and the Wheel at St Louis Union Station in this space under the trainshed. Construction was just starting the day I left Union Station. I can’t wait to get back and see both new additions. 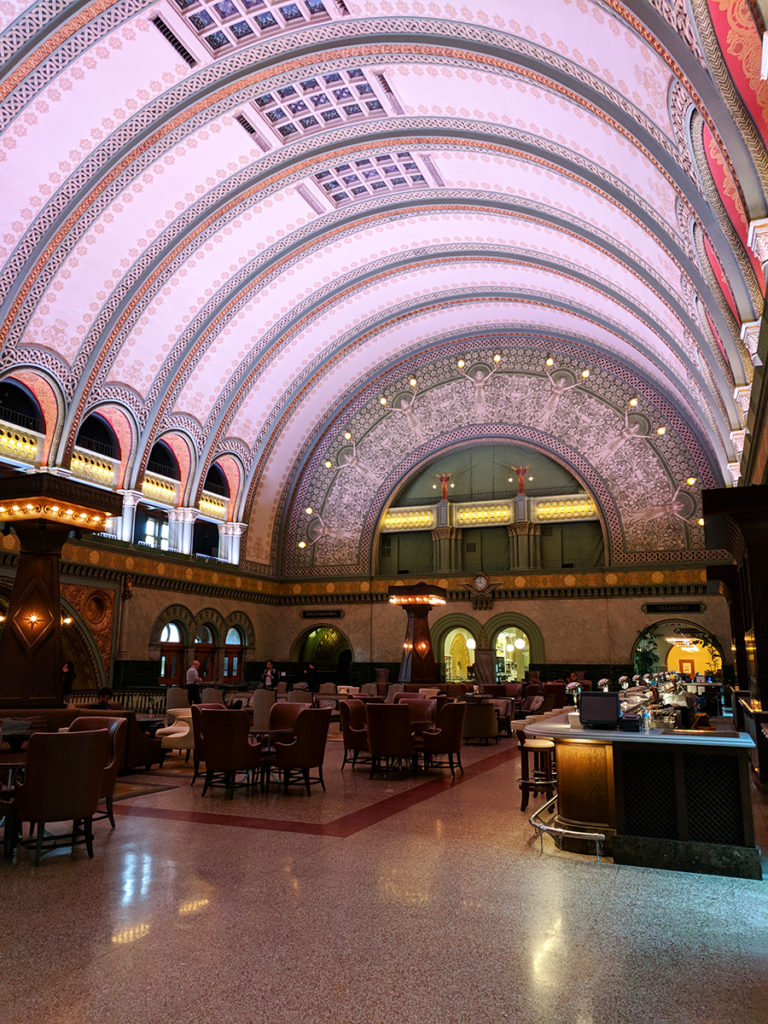 In addition to BBQ, St Louis is home to some really good eats. Here’s a couple of other places that I really liked too.

Lombardos: In town since 1934, this restaurant IS St Louis. Family owned and operated, they serve authentic Italian food featuring pasta, steaks and seafood. There are a couple of locations but I dined at the one conveniently located across the street from Union Station. I had the fried ravioli, which St. Louis is known for and some of the best garlic cheese bread I’ve ever had. Even though the restaurant is in a touristy area, the bar was full of locals. That’s always a good sign.

The Fountain on Locust: If you ever wanted to have a meal in an old Stutz auto showroom, put this place on your list. Hip and decorated with hand painted art deco designs, they serve delicious made from scratch food and cocktails.

While all the food I ate was delicious, it’s their ice cream and boozy desserts that makes it one of the most unique things to do in St Louis. Generally, I’m not a huge ice cream fan but theirs, sourced from a dairy in Wisconsin, is so good, I would eat it every chance I got. All the sauces and toppings are made in house too. If you’ve only ever had chocolate sauce out of a bottle, you don’t know what you’ve been missing.

I also loved the fact that a lot of the cocktails were named after famous St. Louisans. I had a gin based, T. S. Eliot, after the poet born on Locust Street.

Thaxton Speakeasy: The perfect Speakeasy should be secret, hidden and dark with great cocktails. Thaxton checks all the boxes. They are the only password protected bar, or underground lounge as their website states, in St. Louis. Located in the Historic Thaxton building downtown, you enter street side and go into a room they use for events and down the steps into the cozy basement turned bar. The whole experience IS prohibition.

They have friendly and knowledgeable bartenders mixing classic drinks. I ordered an Aviation, which can be a tricky drink to make but it was perfectly done. There is live music on Thursdays, some other special events and industry nights from time to time. You can sign up to receive the weekly password on their website by providing your cell or an email.

The Grove: located in Forest Park area of St Louis, this area was once called Adam’s Grove in the 1950’s. At that time, it was a busy commercial district back then. After experiencing a decline, the area has been brought back to life and revitalized. It’s now home to over fifty businesses and is booming again. There’s a brewery, multitudes of restaurants, bars, coffee shops and street art galore. 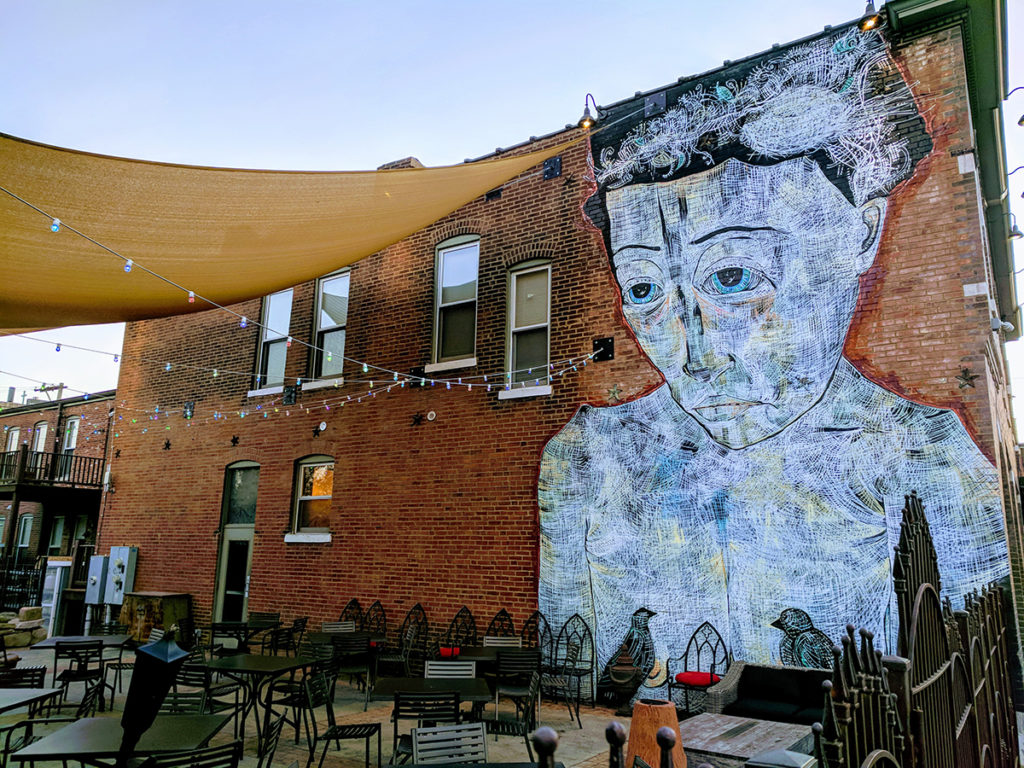 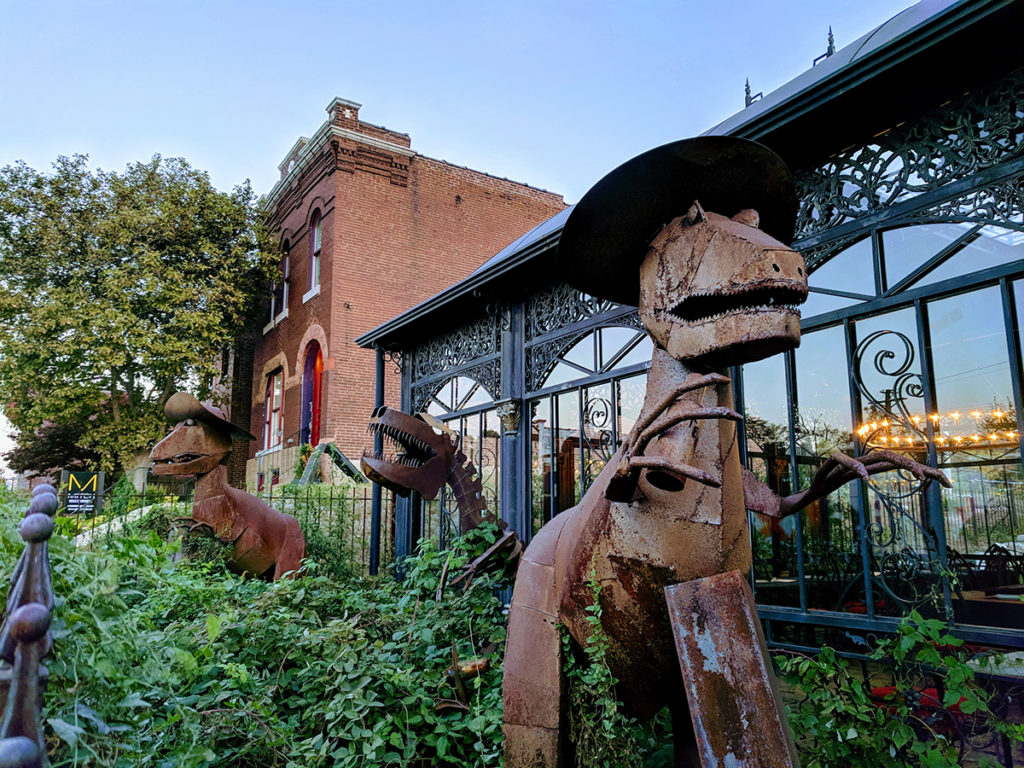 St Louis Public Library: Ever since I had to learn the Dewey Decimal system in elementary school, I’ve had a thing for libraries. So when I was driving around and happened upon the Manolo Valdes’ sculpture ‘Butterflies’ on the outside terrace of this beautiful building, I was immediately drawn to it. Unfortunately, it was my last day and I didn’t have time to check it out.

Little did I know until I got home that it was the public library! After doing some research, I learned the library, built in 1912, had closed for a renovation a few years ago. The city, wanting to add more access to the public while preserving the beautiful building, increased space by 45%, added a three story atrium and removed some of the book stacks to show off the space. The Manolo Valdes’ sculpture was just the first step of real butterfly garden they are hoping to add. I’m definitely making time to go inside when I’m there next time.

St Louis offers so much fun stuff to do. It’s especially great for families because a lot of activities are free. The St  Louis Zoo, The St  Louis Science Center, and the Missouri Botanical Gardens all have free admission for kids and only charge a fee for special exhibits.

I heard so much about the City Museum and I’m still kicking myself that I didn’t have a chance to go. It looks like such a unique place.

Besides all the donuts in the area there are some other treats St Louis is know for. Gooey butter cakes can be found around town at pastry shops and bakeries. The name describes them exactly. They are pretty delicious. Another uniquely St Louis thing is Ted Drewes Frozen Custard. Like I mentioned, I’m not a huge fan or ice cream so I didn’t try it while I was in St Louis but everyone raves about it.

Getting to St Louis

Getting to St Louis is very convenient. Because of it’s central Midwestern location, flights into Lambert International Airport (STL) are no more than a couple of hours from most major US cities. TSA Pre-check is available at the airport, but at the time of writing, Clear is not available yet.

Car rentals are a quick shuttle ride away with plenty of gas stations nearby for fill ups when you return your rental.

Valet or self park is available at Union Station Hotel. Check their website for current prices. This whole area is under construction since they are adding an Aquarium and other attractions in this area. Coming Fall 2019 and expected to be open 365 days a year!

Getting around St Louis

Getting around St Louis is super easy for a big city. Traffic was never congested. Although I heard others complaining about it, coming from Atlanta, it was a breeze. I didn’t use any public transportation while I was there but I did use Uber a couple of times.

Street parking is metered but very affordable. It’s $.25 for every fifteen minutes. Free on Sundays and after 7pm Monday through Saturday.

In some areas there are paid parking lots. They cost a little more but I found them to be pretty affordable as well. You can use your credit card to pay. The City has a website to help find downtown parking. There were only a couple of areas that I had trouble finding parking, mainly because it was a new city for me and I really didn’t know where to look. All in all it was an easy city to get around in.

Hey y'all! I'm Lori! A Southern girl with a passion for travel, road trips and all the stuff found along the way. Exploring North America and beyond.