My goal for 2020 is to say yes to new adventures or I should say, yes to MORE new adventures. I had plenty in 2019. I visited two new countries and revisited some other favorites. Driving almost 20k miles in road trips, I crisscrossed the country several times, road tripped Baja and camped solo for the first time.

I had lots of the good moments that either didn’t make into a post or I just haven’t written about yet. I’m so behind y’all! So before the clock strikes midnight on 2019 here’s a few of my favorite travel moments of 2019.

I owe my love of the Beatles to a childhood friend. Unfortunately he lost his life about 10 years ago, way too soon. So when I flew through London on my way to Spain last January, I knew one of the top things I wanted to see was Abbey Road.

It meant an early morning, two mile walk in freezing temps but I made it. When I got there, no on else was around. I thought I walked all this way and there’s no one to document it? Fortunately, it wasn’t long till some other fans showed up and took my picture.

If you’ve never been to Abbey Road, it is a busy street! It’s not the easiest to do to get a photo. Lots of fails and in the end, I had to share with a stroller but I took my walk across Abbey Road. Bucketlist checked. 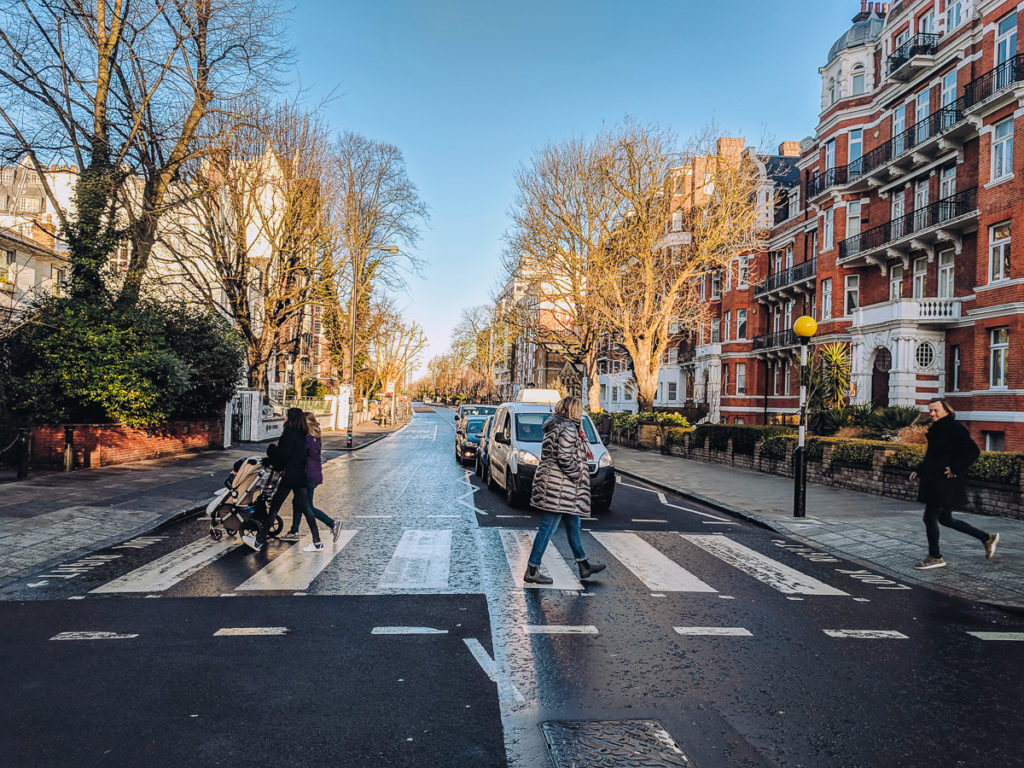 In September I took on a six thousand mile road trip to the Travel Blogger’s Exchange Conference in Billings, Montana. This was my longest solo road trip to date. Starting in Georgia, I drove to South Dakota, where I stopped in Custer State Park and Badlands National Park. From there, I drove on to Montana, attended the conference, then continued down into Wyoming, via the Beartooth Highway.

Since I was headed to Grand Teton National Park, the plan was to stop in Yellowstone to see a couple of things. I’d been to Yellowstone once before in the busy summer season. Although it’s a gorgeous park, I was really turned off by the crowds. This time I was hoping for less crowds and to find more of a connection to it.

The highlight for me of Yellowstone is Grand Prismatic Spring. Grand Prismatic is the largest hot spring in the United States and the third largest in the world. Besides its size, one of it’s most outstanding features is its brilliant colors.

Last time there were so many people there, I was afraid I was going to fall or get knocked off the boardwalk that surrounds it. This time though, I planned it just right and showed up at sunset.

What I experienced left me speechless. While I couldn’t see the normal bright colors, the sun turned the surroundings a deep red. The refection in the springs with all the mist from the hot springs was otherwordly. The fact there were only a handful of people made it that much more memorable and something I won’t forget anytime soon. 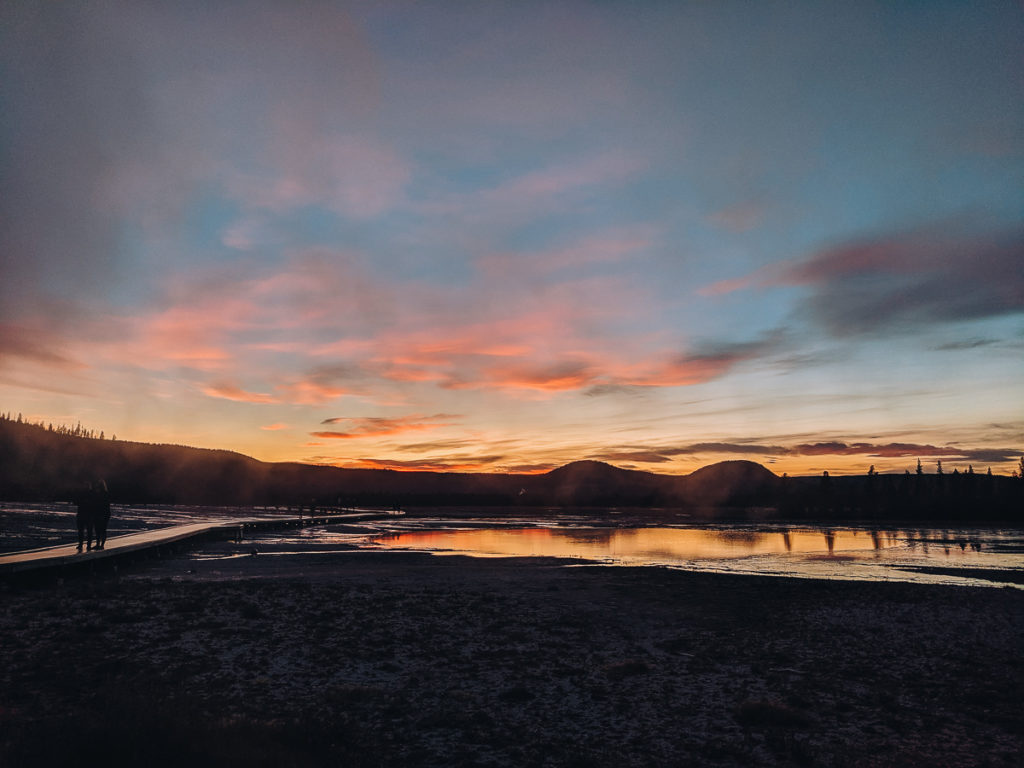 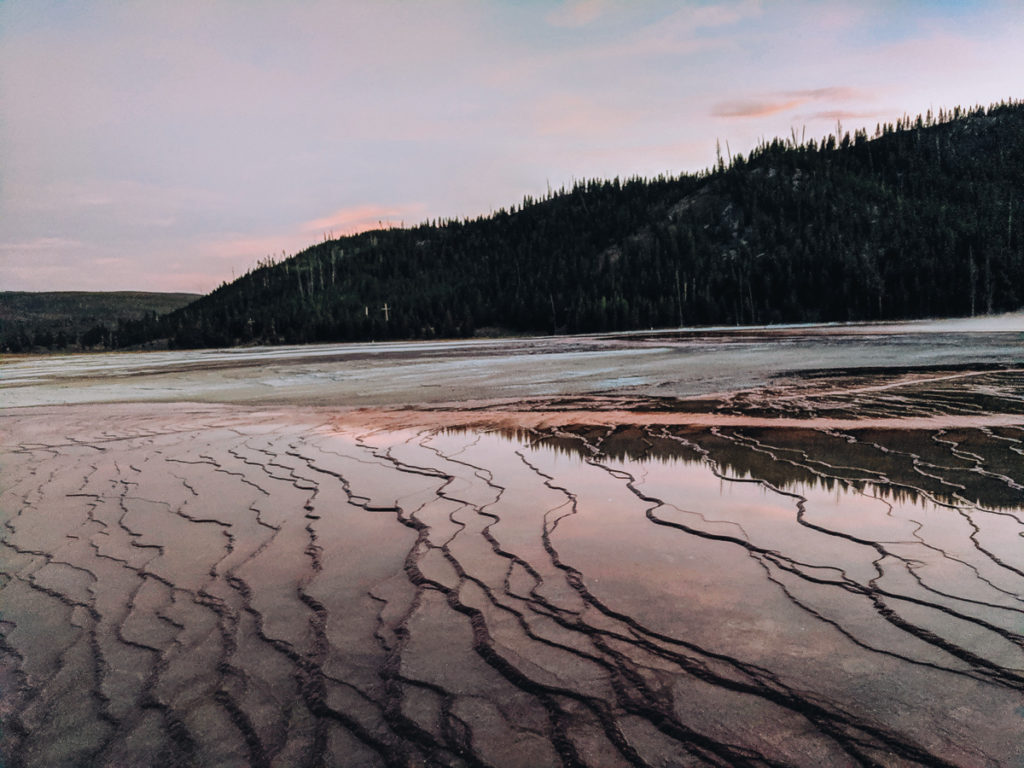 After Yellowstone, I traveled on south into Grand Teton National Park and camped there for a few days, I was having problems with my phone charging, which is never a good thing when traveling. When I finally got that squared away, imagine my surprise when I checked my email and had received a departure letter from my employer. They let me go from my job while on vacation.

Instead of dwelling on the negative, I decided to turn the day around by doing something I had always wanted to do. Kind of like turn that frown upside down. So, I went rafting on the Snake River. That way I would not think of the day as the day I got fired. It will forever be known as the day I floated the Snake.

And what a day! Besides the Snake, I saw a moose and her baby. And they were close!. Of course I’m using a zoom lens in the photos below but I had to hide behind a truck so not to spook mama. The only thing better was I saw them in Moose! Only one of my favorite places in the entire park.

Then when we got on the river, we spotted seven, bald eagles, Even the guide said he had never seen so many in one float trip.

I also met some other great people that. One of which I stay in touch with on social media. I ended the day at one of my favorite spots in the Tetons, Dornans, having pizza and a local craft brew. What could have been a really bad day, turned into one my top travel moments of 2019.

The Elk Rut at Slippery Ann

Before I left Montana, someone told me about Slippery Ann Elk Viewing area. It’s part of the Missouri River in the Charles M Russell Wildlife Refuge, which is in the Upper Missouri Breaks National Monument. This viewing area gives you the opportunity to see elk in their natural habitat.

Slippery Ann is known for its yearly elk rut. The rut is when the males run around bugling trying to catch the eye of the females or cows. The purpose is ultimately mating but the male is also creating his “harem” which is crucial for procreation and survival.

When I was routing my trip, I had tentatively thought about going to the Upper Missouri River Breaks. It’s kind of in the middle of nowhere but once I found out the rut was happening while I was there, I couldn’t pass it up.

So off I went. Since it was kind of last minute, I really didn’t plan well and well, there were some mess ups. Like not having any food and not having anywhere to stay. (This is one of those trips I haven’t written about yet) I didn’t want to leave though. I’ll never forget the sound of those elk and my microwave burrito in only place in the honest to goodness, literal, middle of nowhere Montana.

I’ve made it no secret how much I love Little Rock. After visiting in 2018 as part of a “Savor Arkansas” culinary tour and attending their annual World Cheese Dip Championship, I had plans to return this year as I was driving to and from Nevada.

I’m working on my Little Rock Locally Labeled Passport, a passport you get stamped as you visit the participating breweries, distillery and wineries in town. It’s a fun activity as I’m passing through the city.

This time when the wonderful people at Visit Little Rock knew I was coming to town again, they invited me to be a judge, yes a judge, at the 2019 World Cheese Dip Championship! Last year I was an attendee and this year, they let me judge! Let me just say, I was honored.

One of the things I love about Little Rock is the sense of community. The Cheese Dip Championship is held to raise money for Harmony Health Clinic that provides medical care for the uninsured and the underserved in Little Rock. It felt really good to help out and be a part of something so meaningful.

Once again, I met some awesome people and come on, it’s cheese dip! Who wouldn’t want to try twenty-three different kinds of cheese dip? Thank you Little Rock for a great moment in 2019.

2019 has been a tough year. It basically said but you ain’t dead yet are you? The thing that helped me get through it was the travel. The experiences and the people. I feel so fortunate to have been able to get away sometimes. So here’s to 2020 and more travel. I can’t wait to see what adventures await this year. What will YOU say yes to in 2020?

Hey y'all! I'm Lori! A Southern girl with a passion for travel, road trips and all the stuff found along the way. Exploring North America and beyond.