As a self proclaimed Southern Ambassador, I’m embarrassed to admit I knew very little about the state of Arkansas. Any first hand knowledge, was from driving across I-40 on a road trip to California, with unfortunately, no real stops in the actual state.

Arkansas is considered a Southern state but for us Deep South Southerners, it’s kind of like the cousin you only hear from occasionally. So when I was invited to visit Bentonville for a “Savor Arkansas” culinary tour, I jumped at the opportunity to learn more about it.

From the time I wrote this post, I’ve driven through Arkansas several times and I can’t stop talking about this beautiful and friendly state. Even though I’ve only visited the northwest corner once, there are a lot of great reasons to visit Bentonville, Arkansas. Here’s just a few of them.

With my limited knowledge of the state, I did at least know that Bentonville, nestled in the northwest corner of Arkansas in the Ozarks, is the corporate home of Walmart. Because of this, the area has seen major growth in recent years. And with growth comes challenges of an increasing population.

However, the city and Walmart, via the Walton Family Foundation and other resources, are meeting those challenges head on. They are improving and creating a viable, affordable community to visit and live in.

Even though the purpose of our trip was food related, Bentonville is much more than a culinary destination. It’s a thriving community working together to make it the best of the best. Not only for tourism and the people that visit for work but for the people that currently live there but for the prospective families they hope to attract to the area.

When there’s a Fortune 500 company in town doing business with vendors and people from all over the world you’re bound to see the influence on the community. One of the first things I noticed in Bentonville was the diversity of food choices.

Indian, Thai, Vietnamese, Greek, Salvadorean, just to name a few of the different cuisines I saw. You want Ramen? You got it. Have a taste for reapas? You can get them too. For a Southern town of less than fifty thousand, there are tons of choices that many larger cities don’t even have.

Two of the restaurants at which I had the pleasure of dining, have chefs that have been nominated for James Beard awards. The Preacher’s Son and The Hive were two of the most memorable meals I had all year. Who wouldn’t enjoy eating a meal in a church built in 1904 that’s now a restaurant? Or a restaurant in a hotel that has a museum AND serves cotton candy at the end of the meal?

Another community concept that has a something for everyone is 8th Street Market. I’m a huge fan of repurposed buildings and it seems Bentonville is too. In fact, the company behind this market and some of the other restaurants in town have a policy to utilize buildings that have been sitting empty.

What once was a Tyson chicken plant is now a community focused food hub. Restaurants, merchants, and a brewery all under one roof offer food, shopping, street art, a farmer’s market once a week and just a great place to meet friends and hang out. It’s kind of a one stop does it all place. What a great reason to visit Bentonville. 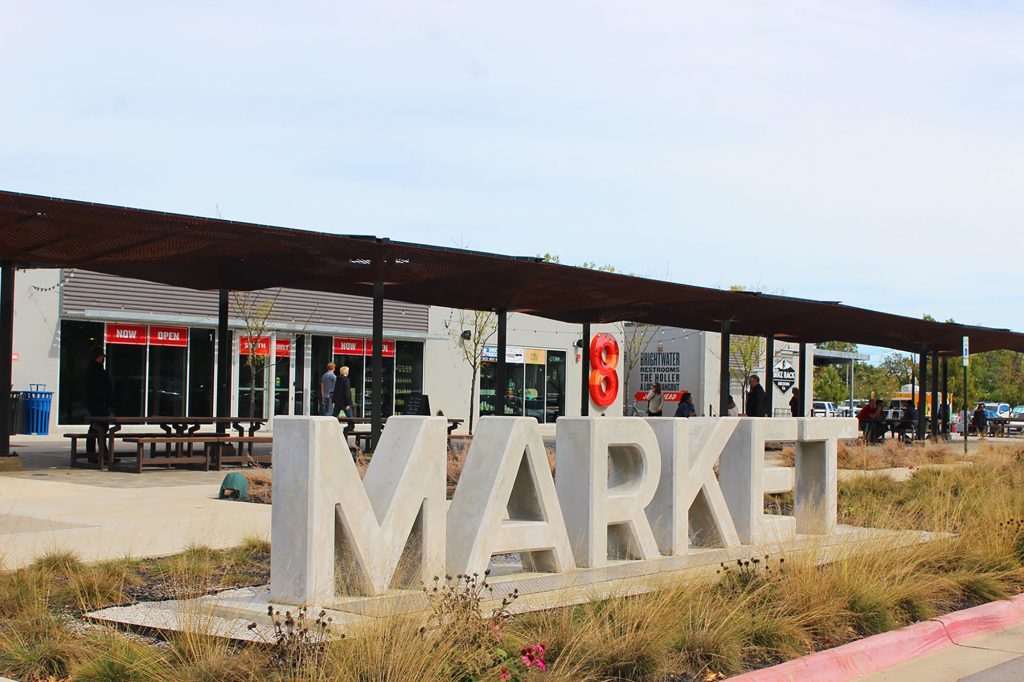 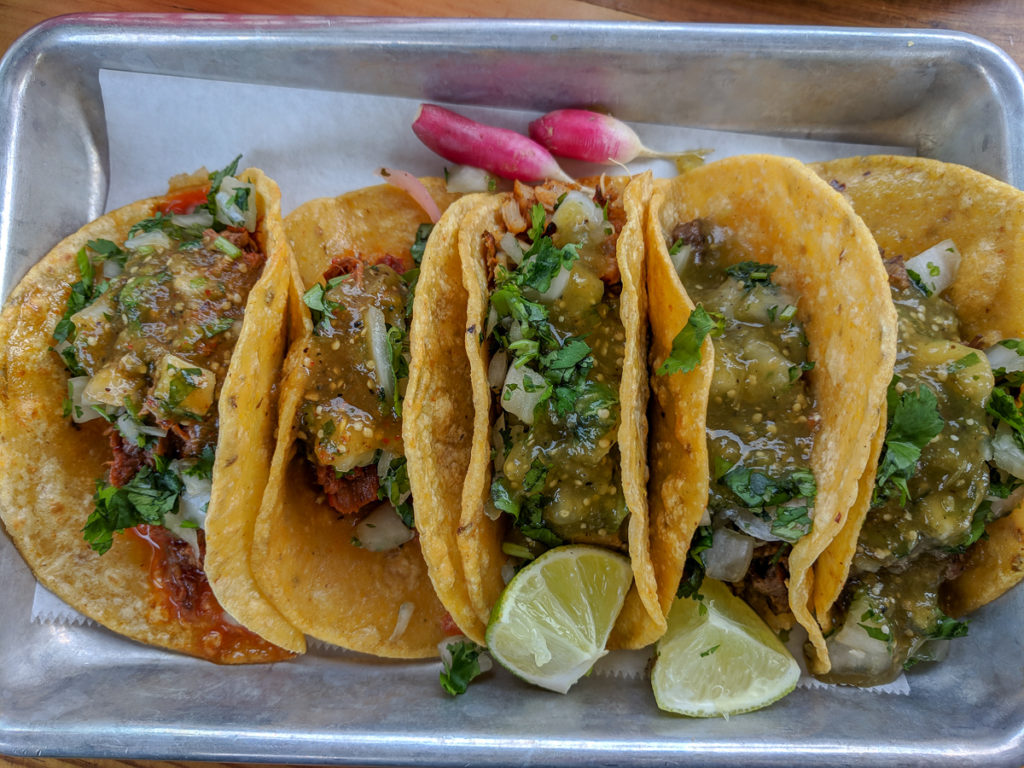 With so much growth in the area, there’s a need for chefs and food industry workers. This issue is being addressed by Brightwater: A center for the study of food. Located in the same 8th Market building and a division of Northwest Arkansas Community College, they offer training in culinary nutrition, artisanal food, beverage management and food entrepreneurship.

The best part is anyone can take a class. Individuals, students and professionals. They cater events on site, work closely with the restaurants in the market and even have a hydroponic greenhouse. The focus on local and seasonal food is teaching to students that what goes into the kitchen is just as important as what comes out. There’s no lack of diversity in museum options in Bentonville either.

Crystal Bridges is a Museum of American Art. I’s the vision of Sam Walton’s daughter Alice. Since the museum opened, it’s been redefining art. Not afraid to take chances with exhibitions, you can works from John Singer Sargent, Pollack and Warhol all in the same room. This museum alone is enough reason to visit Bentonville.

I couldn’t believe my eyes as we pulled up, seemingly in the middle of nowhere and I saw Roxy Paine’s “Yield” out front. The silver tree kind of sets the tone and you know it’s going to be special experience.

The design of the buildings, the windows, the the spring fed water surrounding the grounds are just as interesting to look at as what’s inside. If you don’t feel like being inside, visitors can enjoy trails, sculptures and an entire Frank Lloyd Wright house. That house was dismantled and moved all the way from New Jersey.

One of the best things- admission is free. 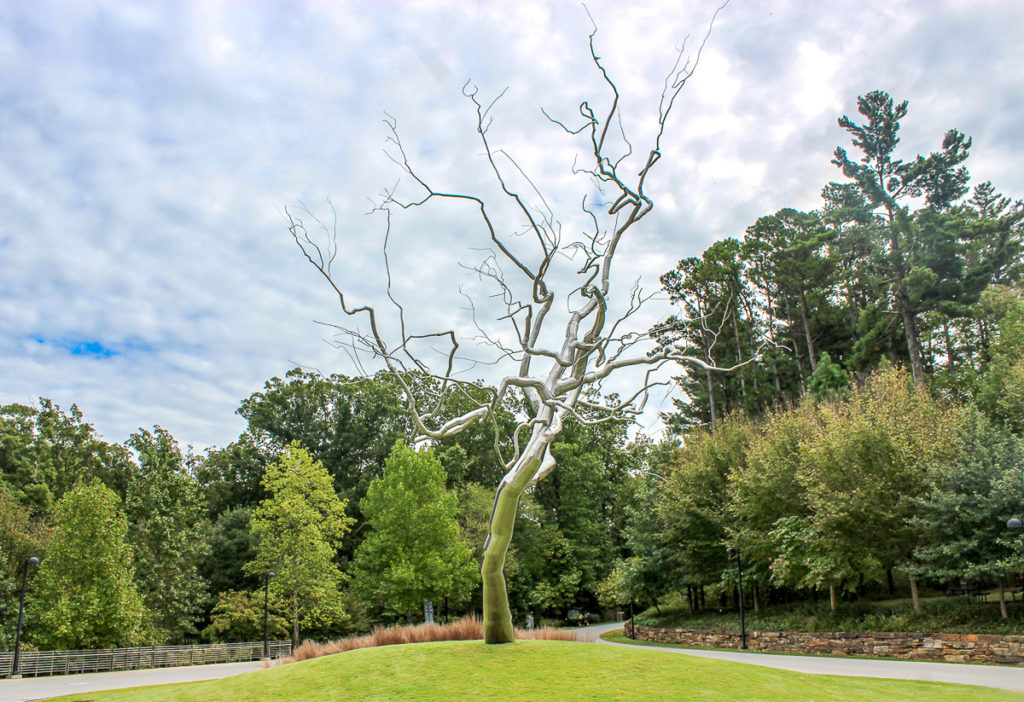 With over 10,000 Native American artifacts, all Native Americans, from South America to Canada are represented. Kids will love the mammoth skeleton, “Tuskers”, from Siberia and the real tee pee outside. They are some great interactive displays just in case you want to know what you would have looked like in full tribal makeup.

The Amazeum is designed for kids, but with 50,000 sq. feet of exhibits and learning space, there’s something for everyone in the family. Part museum, part science experiment, there are all kinds of activities, educational programs and things to climb on. I loved the street art, murals and the happy vibe of the place. Of course, it wouldn’t be Bentonville if there wasn’t a small kid sized Walmart to play in. 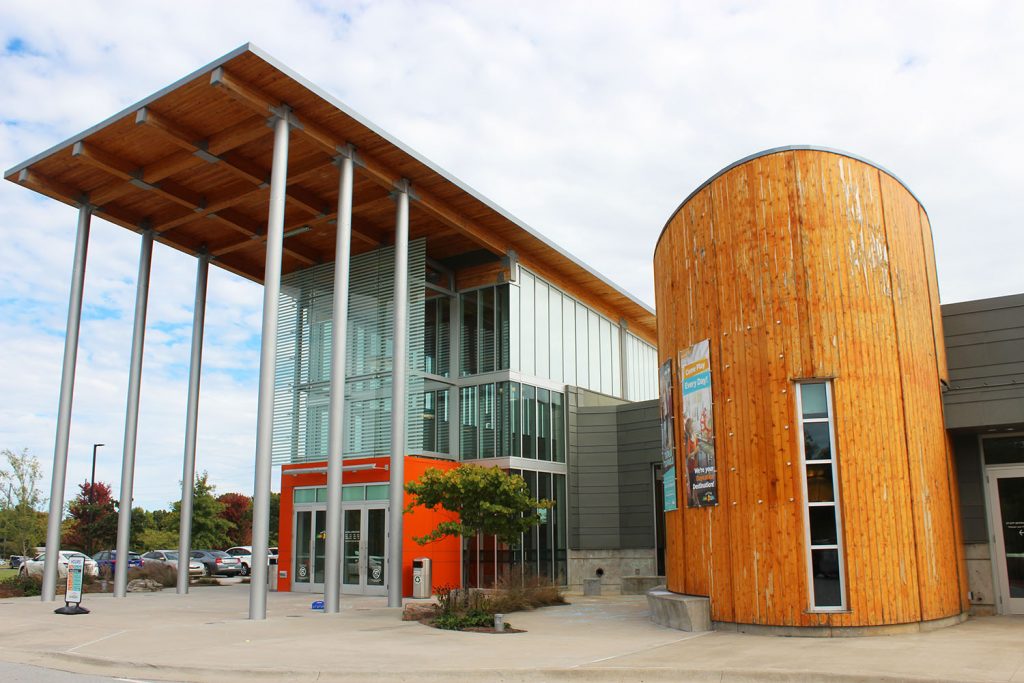 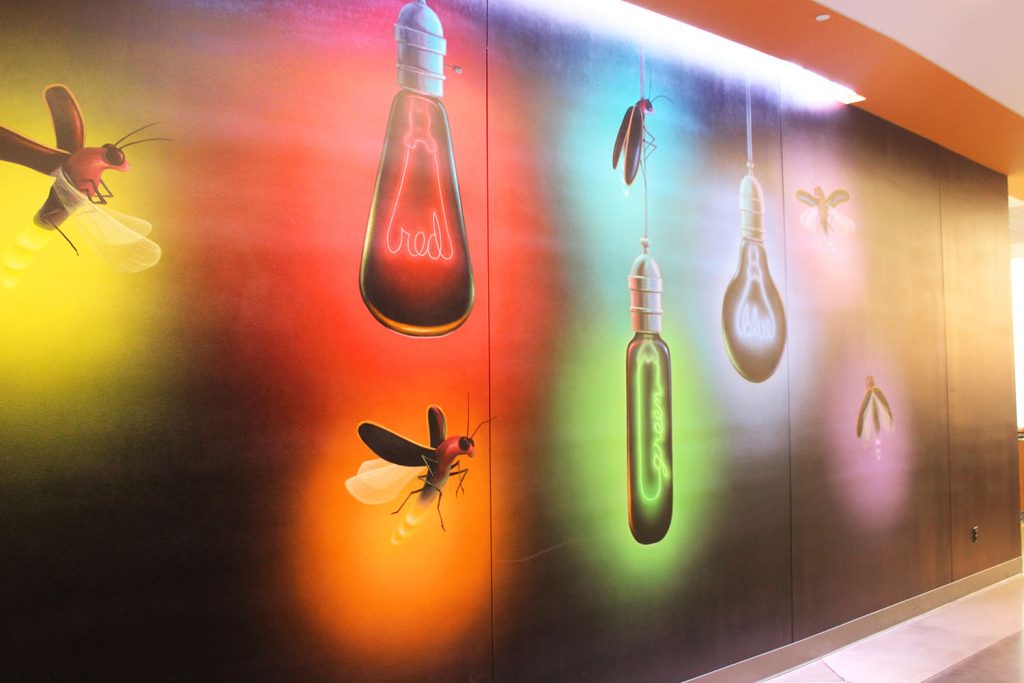 Last but not least, the Walmart Museum. Sam Walton opened his Walton’s 5-10 in 1950, right on the Bentonville Square. Even though he isn’t originally from there, it’s where he created his business and watched his family grow.

As you tour, you can see Mr. Walton’s office just as it was on his last day there, the truck he drove everyday and learn more about his personal life. Mr. Walton also loved ice cream. The Spark Cafe at the end of the tour offers you a taste of his favorite flavor, Butter Pecan and others. They even have a special Spark flavor, named after the Walmart Spark Logo. Admission to the museum is free.

Nature is a Great Reason to Visit Bentonville, Arkansas

With sixteen parks in the area, Bentonville is all about encouraging people to get outside and get moving. Dog parks, kid’s parks. outdoor concert venues and green spaces are just a sample of how Bentonville has taken advantage of their beautiful Ozark surroundings. They have created over 40 miles of bike paths and walking trails that take you through different types of terrain. Many of these trails connect the downtown area with parks and even Crystal Bridges.

Fishing and boating abound in the nearby lakes and rivers and Climb Bentonville, the only of it’s kind, has has climbing and fitness facilities. 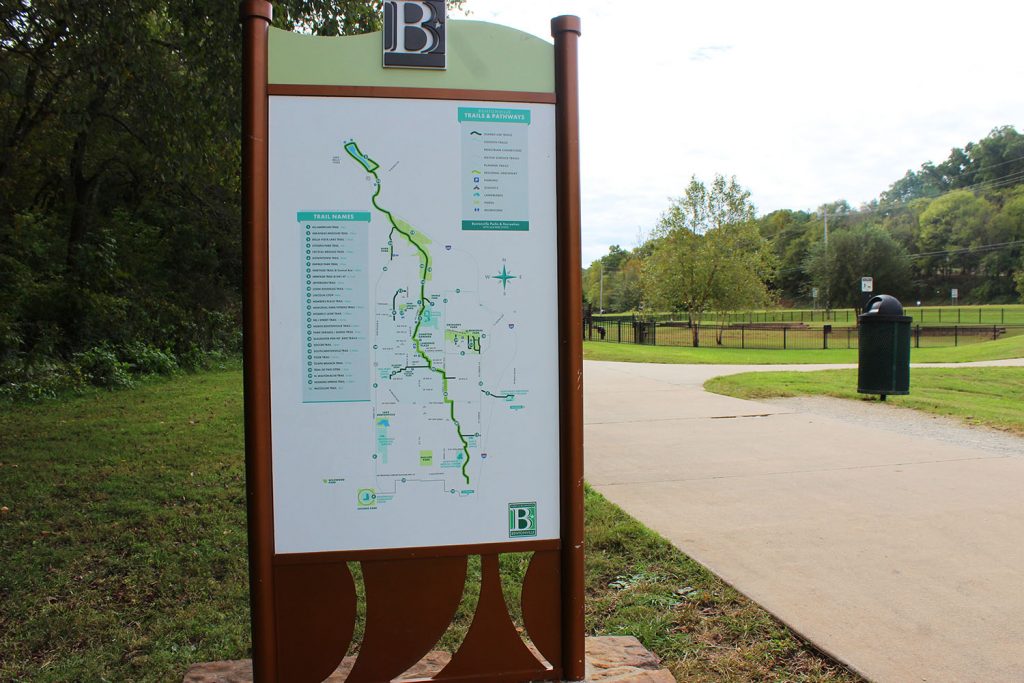 Even though I love road trips, there’s enough room in my heart for airplanes too. What Bentonville has planned for locals to learn about and enjoy aviation may just be my favorite thing I saw. While this area of Arkansas is serviced by the Northwest Arkansas Regional Airport, Bentonville has it’s own small airfield, the Louise Thaden Field, used for smaller aircraft and helicopters.

Last year, they opened The Fieldhouse at Thaden Field, named after Louise Thaden. Anyone that’s ever checked into learning to fly, probably found out it’s not the easiest thing to do and it’s quite expensive. The goal of The Fieldhouse is to make learning to fly more simple and accessible to the general public. The Fieldhouse is kind of like a country club for pilots. You can train, test, rest and just hang out. But the public is welcome to come and enjoy it as well. 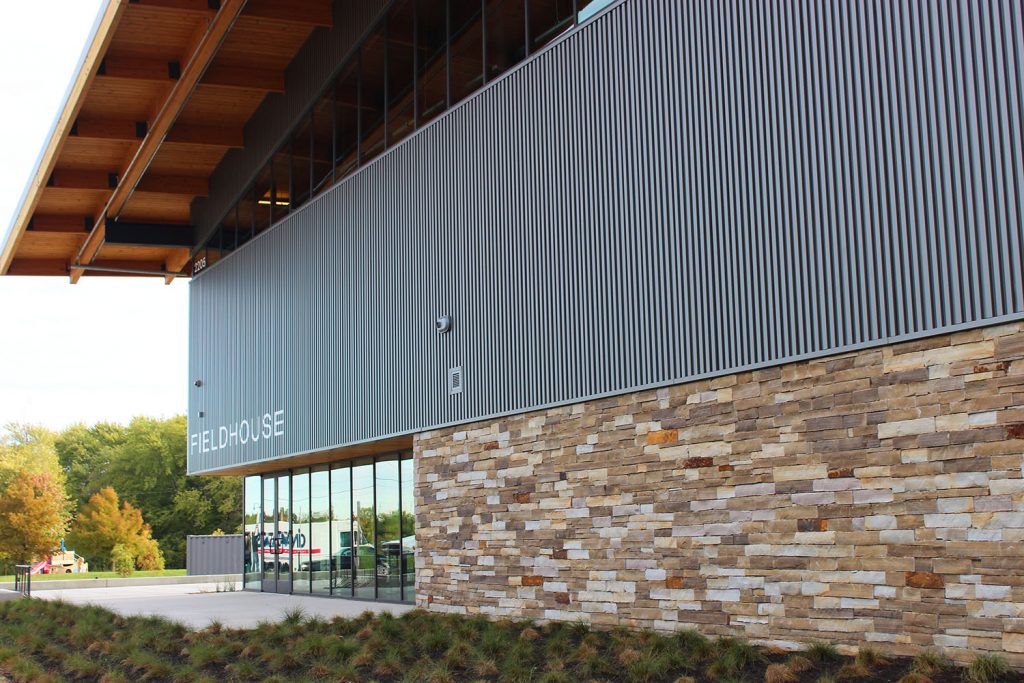 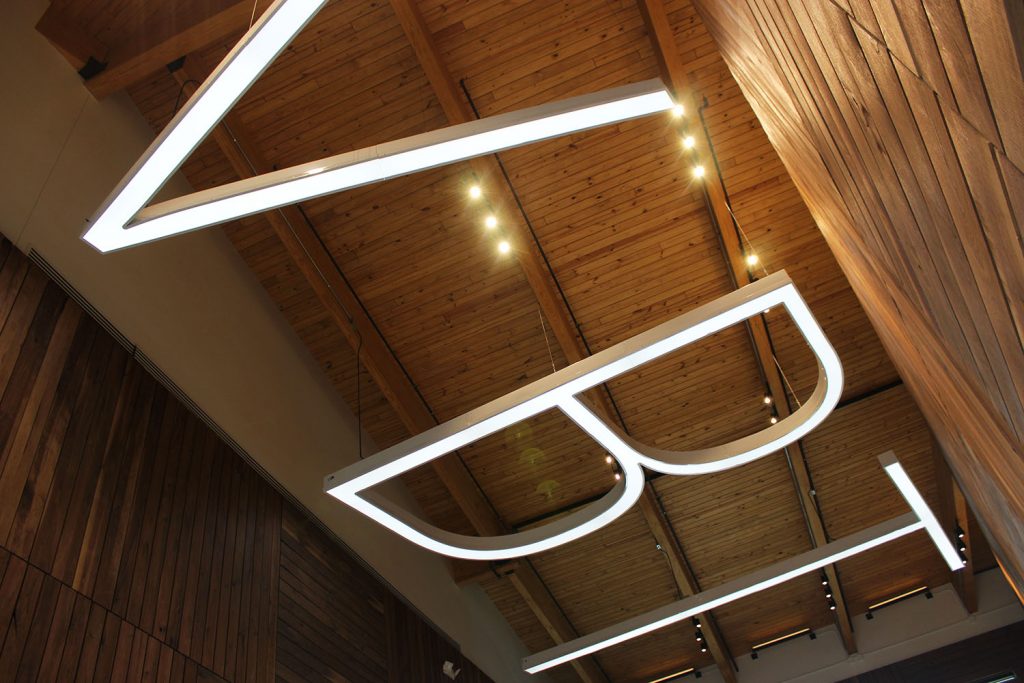 There’s an exhibition hangar, where they plan to have aircraft and other aviation related things on display. I was there the week after they opened so they were still setting up. Eventually they will have more displays and even videos of Louise Thaden.

Thaden, born in Bentonville, was an true aviation pioneer. She set world records, was a friend to Amelia Earhart and was the first woman to win a National Air Race.

In celebration of her accomplishments, the Fieldhouse has a cozy cafe named “Louise”. They serve breakfast, lunch and dinner. With indoor and outdoor seating, you can dine and watch planes taking off.

In summer months, there’s a huge outdoor space for fun and lawn games. You can also rent bikes or canoe on Lake Bentonville adjacent to the airfield. 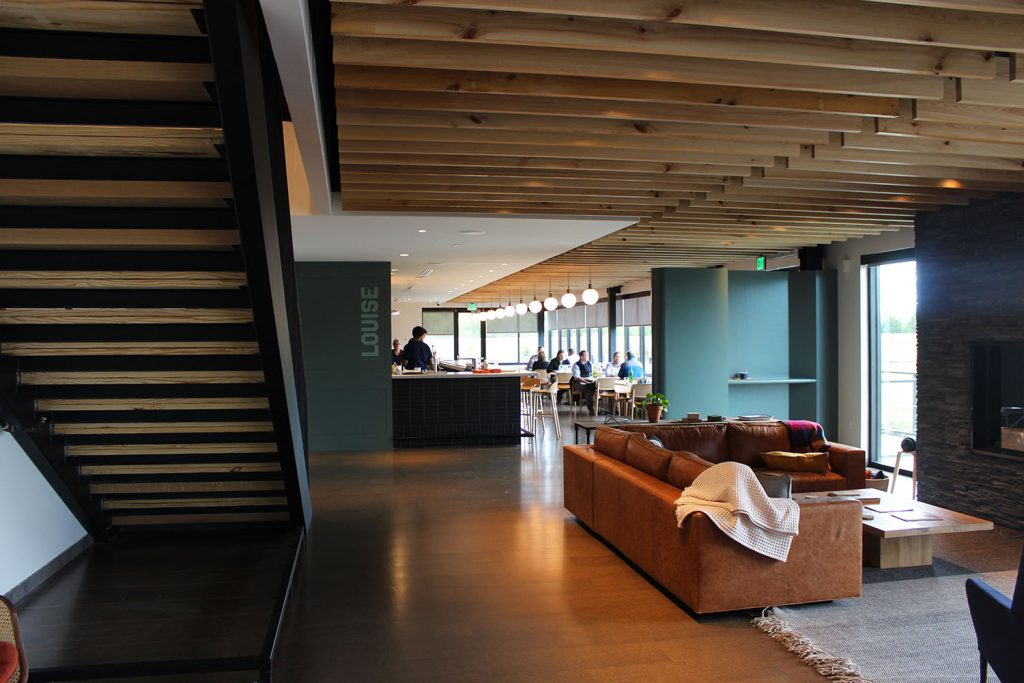 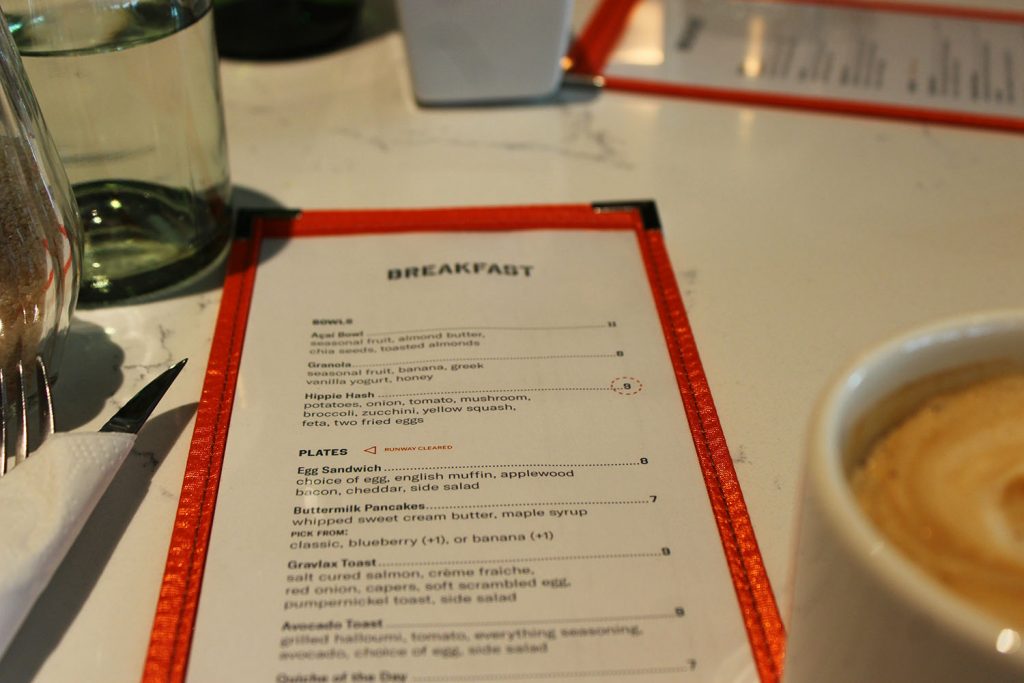 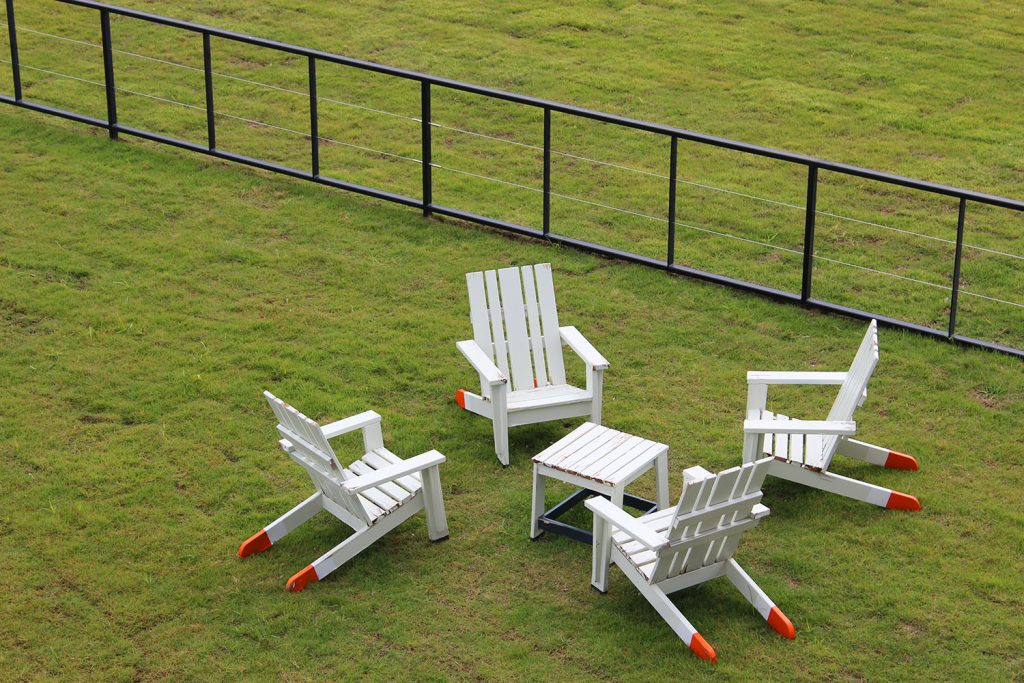 One of the Best Reasons to Visit Bentonville, Arkansas

All of these things I’ve mentioned make Bentonville a great place to visit or even live but a community is only as good as it’s people. I think one of the top reasons to visit Bentonville, Arkansas is the sense of community.

Time and time again I was struck by the forethought and effort they are putting into creating and improving the area. At the same time they are honoring the past and acknowledging how they got to where they are today.

On this trip, I traveled to Bentonville and Little Rock and it’s rare that you come in contact with so many nice people. I’m convinced that Arkansas is just a nice state.

As far as Bentonville is concerned, I can’t wait to go back and check in on them again and see what other creative projects they’ve come up with.

Sometimes we just need a little help to see an overlooked place. I’m thankful to Visit Bentonville for inviting me. Even though I was hosted by them, all experiences and opinions are my own. And my opinion is: put Bentonville on your to visit list!

Hey y'all! I'm Lori! A Southern girl with a passion for road trips, public lands & good food. Exploring the Americas and beyond.